Every year, thousands of athletes around the world compete in high adrenaline competitions called lumberjack competitions or timber sports. On a regional level, competitions are organized by the Pennsylvania Professional Lumberjack Organization (PPLO). North Central PA is honored that local athlete Dominic Ruckle took home this year’s Axeman of the Year award for the PPLO.

Every year, thousands of athletes around the world compete in high adrenaline competitions called lumberjack competitions or timber sports. On a regional level, competitions are organized by the Pennsylvania Professional Lumberjack Organization (PPLO). North Central PA is honored that local athlete Dominic Ruckle took home this year’s Axeman of the Year award for the PPLO. I was able to connect with Dominic for an interview to discuss his big win and what’s next.

Dave – Dominic, tell me about your award-2022 Axeman of the Year.

Dominic – The Axeman of the Year award is sponsored by the Pennsylvania Professional Lumberjack Organization (PPLO), which hosts and assists in running over a dozen lumberjack sports events held at various fairs and festivals throughout Pennsylvania. This award is meant to honor and provide an incentive to the athlete who has improved the most over the past year. All athletes in the PPLO are considered for the award, and it is based upon performance alone. I guess I did well enough over the season to receive the award.

Dave – Describe lumberjack competition. What are the events, and what equipment is used?

Dominic – Lumberjack Competitions are celebrations of the logging industry from many years ago. We have chainsaw racing and even modified or unlimited class hot saw racing, but the events I enjoy the most are the ones that involve the use of the axe, and the crosscut saw. The axes and crosscut saws are not the types of axes or hand saws you would see at a hardware store. You have to find racing axes and racing crosscut saws. There are only a few makers of these specialized types of equipment in the world, and these axes and saws are not cheap.

All the athletes race against one another on wood that is provided by the organization or the fair/festival, and everything is a timed sprint race. Who can chop the block the fastest, or who can saw through the log the quickest. You get better at the racing by training in the events you do at the contest.

There are three axe disciplines — the underhand chop, the springboard chop, and the standing block chop. The underhand chop involves standing on top of the standing block, which is simulating the felling of a tree in the woods. For the springboard, we use two boards to ascend a nine-foot pole to chop a block affixed at the top. It’s also referred to as the lumberjack scaffolding system. The standing block chop is pretty much just like it sounds. A block is placed on a stand, and competitors chop through it in the fastest time possible.

The saw disciplines consist of the two-man, the one-man, and the jack-and-jill. We also have an axe-throwing event which is quite a bit different than what you would find at the axe-throwing bars — the target is farther away, the axe is heavier and larger, and the handle is longer. There are also events such as peavey log rolling where we use a peavy or cant hook to maneuver the log through a course in the quickest time.

The sport is worldwide. As I understand it, 27 different countries have events similar to what we do in PPLO. Some events are much larger, too, and the prize purses are much larger as well.

Dave – How did you get into lumberjack competition?

Dominic – I was a wrestler early in life. I even rode rodeo bulls. I enjoyed the challenge. I am an athlete that is always looking to find hidden potential in myself. I have a friend and co-worker, Sean Frantz, who was involved with the PPLO. I went out and watched one of his events when I moved back to PA from Colorado. After watching it, I had to try it. I haven’t stopped since. It’s addicting, it’s fun, and it’s athletic.

Dave – Why do you enjoy competing?

Dominic – We all do what we do for different reasons. I’m an athlete. I also enjoy traveling. I’ve only been involved in this sport for about a year now, and I’ve traveled to events in Ohio, Pennsylvania, West Virginia, Virginia, and New York. As I understand it, there are lumberjack sporting events in over 30 different states and four of the provinces in Canada. The events in Australia and New Zealand primarily involve the axe, and I really hope to get down there and compete someday.

Dave – What are your competition goals?

Dominic – My competitive goal is to be the best version of myself that I can be. At first, it was to beat the people that mentored me, and I did that this summer. Now, the goals are a bit broader-to travel to larger events and to see where I stand against the best in the sport.

Dave – Who do you think were your biggest influences in this sport?

Dominic – My mentors that helped me get started in the sport and really guided me in a great direction. Arden Cogar Jr. of Charleston, WV; Joshua Wilson of Morgantown, WV. My co-worker, Sean Frantz, was the first lumberjack to show me how to chop with a racing axe. Also, Bill Simcox of Farrandsville, PA, who is a long-time competitor, helps me train and become a better timber sports athlete.

Dave – Is there anything else you want to add?

Dominic – One of my mentors, is 53 years old and is still at or near the top of his game. There are even guys in their 60s that are hard to beat in some events. Age is a just a number doing lumberjack sports. You come to a PPLO event; you’ll see competitors as young as their early teens and as old as 80. It’s about what you put into it. This is something I can see myself doing for a long time and something I can see myself teaching a child because it’s a sport that is not only healthy, but it’s simply great stress relief.

For more information about the Pennsylvania Professional Lumberjack Organization go to their website, pplo.org, or find them on Facebook. 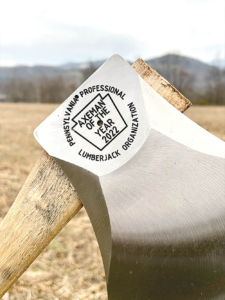