By BRETT R. CROSSLEY For the Webb Weekly WILLIAMSPORT—Even the threat of the year’s first major snow storm couldn’t stop Loyalsock from treating its longtime coach Ron “CI” Insinger to a special moment on a Saturday afternoon. The Lancers welcomed in Hughesville for a game that was bumped up to an early start as the

WILLIAMSPORT—Even the threat of the year’s first major snow storm couldn’t stop Loyalsock from treating its longtime coach Ron “CI” Insinger to a special moment on a Saturday afternoon.

The Lancers welcomed in Hughesville for a game that was bumped up to an early start as the storm loomed over the area. It was a typical Loyalsock outing as it built a big lead, leaned on its defense, and finished strong as the junior varsity players competed throughout the fourth quarter.

The ending result was a 66-33 win over Hughesville. It might have looked like a typical win for the Lancers, but it was far from that emotionally as the victory gave Insinger his 1,000th career win.

“I’m just going to go home and reminisce and reflect on all the great players who have touched my life,” Insinger said. “I can go down every team and there’s always been seven or eight people who have been really important to me. They’ve helped me along the way and made me what I am today.”

Most of those players would not be able to help secure the final win, but they certainly helped along the way. The ones who could help get to the top were ready as they opened on a 12-0 run.

Gerald Ross, who scored his 1,000th career point last year as Insinger picked up his 900th win as Loyalsock’s boys basketball coach, opened the game with four straight points. Connor Watkins hit a three, but Ross continued to stay hot as he scored nine of the first 12 points for the Lancers as the run forced a timeout from Hughesville.

Ross kept the offense rolling, but it was Watkins and Bam Brima who challenged the defense. The Spartans scored in single digits in all but one quarter. They also turned the ball over 22 times as the Loyalsock defense clamped down.

“That’s kind of what Bam and I try to bring to the table,” Watkins said. “We know we have scorers and stuff like that on offense. Bam and I want to play tough defense and control the glass.”

Watkins had consecutive blocks in the second quarter when Clayton Poust attempted to drive through the Loyalsock defense. He first attempt was rejected, but the Spartans were able to collect the ball. Poust went through the middle again and Watkins sent the ball back. Watkins finished with eight points, four blocks, and three rebounds. He even canned a three in the opening minutes of the first quarter to help with the 12-0 run to start the game.

Brima was just as good, finishing with three blocks, five rebounds, a steal, and four points.

“We scored 66 points and it was a kind of a low scoring game for us,” Brima said. “Whenever we can just hold a team to under 40 points it’s definitely something we focus on and practice. It’s a priority.”

Anthony Pastore completed a four-point play in the fourth quarter when he was fouled on a three-point attempt. He finished with 13, which was just behind Ross, who led the way with 22 points.

Ross scored the first four points of the game, added four in the second, and led the way in the third with nine to help Loyalsock finish strong. 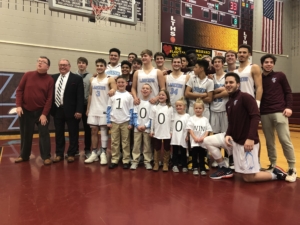 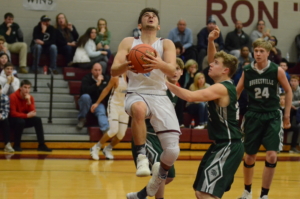 BRETT R. CROSSLEY/FOR THE WEBB WEEKLY
Loyalsock’s Anthony Pastore attempts a difficult shot underneath the basket during a game against Hughesville. 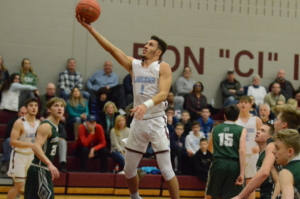 BRETT R. CROSSLEY/FOR THE WEBB WEEKLY
Loyalsock’s Gerald Ross goes in for a layup after making a steal against Hughesville. 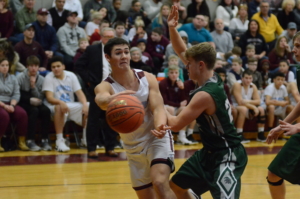 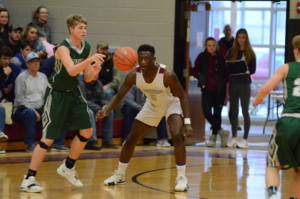 BRETT R. CROSSLEY/FOR THE WEBB WEEKLY
Loyalsock’s Bam Brima defends a Hughesville player at the top of the key. Brima was outstanding on defense and finished with two blocks a Loyalsock won 66-33.