By BRETT R. CROSSLEY For the We..." /> Outside shooting and defense help give Loyalsock 61-44 win over State College – Webb Weekly Online

By BRETT R. CROSSLEY For the Webb Weekly STATE COLLEGE—Loyalsock’s offense has been outstanding all season. The Lancers have averaged nearly 50 points per game, topped the 100-mark once, and have finished each game with multiple double-digit scorers. The offense has been great, but the defense finally got a chance to shine during the State

STATE COLLEGE—Loyalsock’s offense has been outstanding all season.

The Lancers have averaged nearly 50 points per game, topped the 100-mark once, and have finished each game with multiple double-digit scorers. The offense has been great, but the defense finally got a chance to shine during the State College Kiwanis Holiday Basketball Classic.

After a solid performance on the opening day to help defeat Strath Haven, Loyalsock’s defense held State College to just 11 first quarter points and four in the second as the offense made six threes over the run to down the Little Lions 61-44.

“It’s all the enthusiasm and energy that they are creating off made shots,” Loyalsock coach Ron “CI” Insinger said. “I’d like to think we had seven guys on the floor, because some of them are playing for two men.”

The defense swarmed like there were more than five players on the court throughout the game. State College scored just four points in the second quarter as Loyalsock’s press forced multiple turnovers. Oliver Kline and Nick Pollack each made a basket from the floor for all of the Little Lions’ second quarter scoring.

As the defense limited State College’s chances throughout the first half, the offense stepped up with seven threes over the first two quarters of the game.

“They were helping a lot. I don’t think they scouted us very well,” Aiden Gair, who connected on three threes in the first quarter, said. “We had a lot of open shots from the corners. Me, Gerald, and Connor were all hitting threes early on. That helped us keep the momentum throughout the game.”

Gerald Ross hit three and Gair also got three from long range, but it was Connor Watkins who surprised some with his ability to pull back from beyond the 3-point line.

Anthony Pastore was huge over the first and second quarter runs, always finding the open shooter and giving his teammates a chance.

“Everyday in practice I just try to run the offense and execute it the best way possible and find the open man or open shot,” Anthony Pastore said. “Today the open shot wasn’t there for me, but I was getting a lot of guys open.”

“Aiden made those big treys and a couple other guys and then it just pumped us up more and created more energy,” Insinger said. “It jumped started our whole defensive scheme.”

Gerald Ross took over in the second quarter, scoring eight of his game high 19 points in the process. Ross then hit two threes in the third and blocked a shot in the fourth quarter. Overall, he finished with 19 points, four rebounds, a block, and two steals.

Pastore was fouled while going to the hoop in the third, but managed to make his shot for a 3-point play. He connected with the ensuing free throw to give Loyalsock a 45-25 lead. Pastore finished with 16 points on the day and managed to grab four rebounds.

“Rebounding is one of the most important things for us, because we know that if all five guys on the court are getting back and rebounding, we’re always going to win those 50/50 balls and have more possessions to win the game,” Pastore said.

For the second straight day Loyalsock was able to give its bench some extra work as it led by 21 with just over three minutes to play.

All photos can be purchased by contacting Brett R. Crossley at Brettcrossley44@gmail.com or reaching him on Twitter @BrettCrossley44 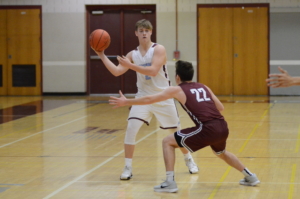 BRETT R. CROSSLEY/FOR THE WEBB WEEKLY
Loyalsock’s Aiden Gair looks for an open player during the fourth quarter of a game against State College. Gair hit three threes in the first quarter to help Loyalsock record a 61-44 win over State College. 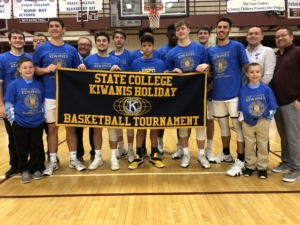 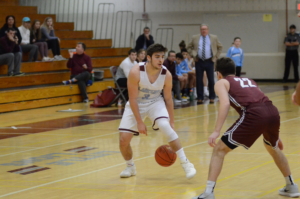 BRETT R. CROSSLEY/FOR THE WEBB WEEKLY
Anthony Pastore dribbles around a defender to help get Loyalsock and open look at the basket. Pastore scored 16 points and lead Loyalsock to a 61-44 win over State College. 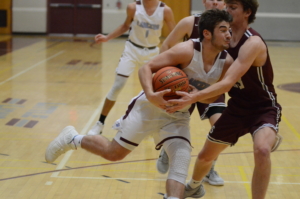 BRETT R. CROSSLEY/FOR THE WEBB WEEKLY
Loyalsock’s Anthony Pastore fights through a foul to make his shots and finish at the foul line. Pastore made the free throw and finished with 16 points. 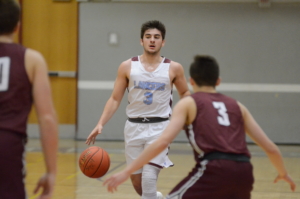 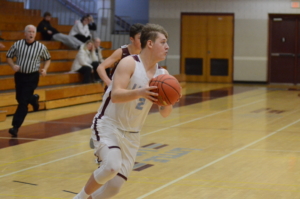 BRETT R. CROSSLEY/FOR THE WEBB WEEKLY
Loyalsock’s Aiden Gair goes in for a layup after making a steal against State College. Gair finished with 13 points as Loyalsock defeated State College 61-44. 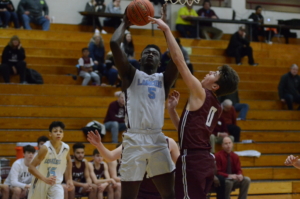 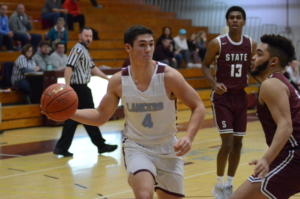 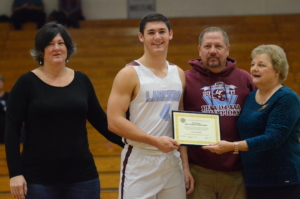 BRETT R. CROSSLEY/FOR THE WEBB WEEKLY
Loyalsock’s Connor Watkins accepts a sportsmanship award during the State College Kiwanis Holiday Classic. Standing with Watkins are his parents Todd Watkins and Dayne Waller. Presenting him with the award is Kathryn Mackes of the Kiwanis Club of State College. 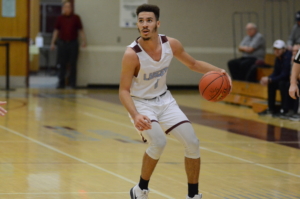 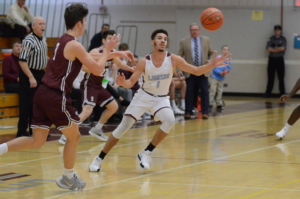 BRETT R. CROSSLEY/FOR THE WEBB WEEKLY
Loyalsock’s Gerald Ross picks up one of two steals during a game against State College. Loyalsock cruised to a 61-44 win over the Little Lions.