By BRETT R. CROSSLEY For the Webb Weekly STATE COLLEGE—The one knock on Loyalsock in the early portions of the season has been its lack of depth after the starting five players. Although the numbers might not be exactly where it wants, Loyalsock’s bench proved its worth during the opening day of the State College

STATE COLLEGE—The one knock on Loyalsock in the early portions of the season has been its lack of depth after the starting five players.

Although the numbers might not be exactly where it wants, Loyalsock’s bench proved its worth during the opening day of the State College Kiwanis Holiday Basketball Tournament.

Rees Watkins scored 13 points, Idris Ali chipped in five, and Dane Armson was big throughout the fourth quarter as Loyalsock downed Strath Haven 72-37 in the opening game of the two-day tournament.

The Lancers will take on State College in the morning at 10 a.m. in the North Gym of the Little Lions’ facility. The Little Lions dropped consecutive games to open the season, but have won three of their last five before starting the Holiday Tournament.

As for Thursday’s game, the Lancers took the lead after a 12-0 run to open the contest and never looked back.

“I keep saying the strength of this team is that nobody can come in and shutdown one player and shutdown Loyalsock,” Loyalsock coach Ron “CI” Insinger said. “Every night we are going to have a different scorer. It’s a luxury you can’t really put a price tag on, because it breeds good comradery. They just love sharing the ball.”

The team first approach that does seem to highlight a different player each game was in full swing as the opening quarter ended with Loyalsock up 20-8. Gerald Ross scored eight points to lead the team over the opening quarter. He also added a rebound and a steal to his totals. Aiden Gair and Connor Watkins each added four points as Bam Brima and Anthony Pastore added a basket each. Amerson recorded a block.

The second quarter gave more bench players a chance to contribute with Rees Watkins leading the way with nine points. He was crucial in helping direct the ball to open players. Loyalsock did a good job of collapsing the defense and kicking out to open shooters. Watkins finished the eight-minute stretch with a three to push his totals to nine points as the buzzer sounded.

“I was just doing my stuff,” Watkins said. “It feels great, because I know I can do it.”

Watkins also proved he can do more than just score points. Near the beginning of the fourth quarter Insinger pulled his starters and gave the bench a chance to play. Watkins, along with Armson Saraj Ali, and Idris Ali, took over in the final quarter to lead Loyalsock to 26 points.

Armson got to the line twice and Idris Ali hit his third three in six games. The bench was outstanding for the Lancers as it finished with 24 of the their 72 points.

“We can see several improvements at practice,” Insinger said. “For one reason or another some of Loyalsock’s great teams weren’t great practice teams. This team is a good practice team. They layout for loose balls in practice and fight for every point. That’s a good sign.”

Bam Brima followed up a disappointing game against Montoursville with a dominant performance against Strath Haven. He finished with four points, five rebounds, and two blocks, but it was his defense in the middle of the paint that made the biggest difference.

Brima changed the directions of shots and took the Panthers top scorer in Luke Edwards out of the game. Edwards scored four points in the opening quarter, but just managed to score three the rest of the way as he struggled against Brima’s size and length.

“I just like winning games,” Brima said. “It’s a big part of it. Right before break we watched film and conditioned more. This is a big tournament for us.”

Brima was part of another big defensive performance for Loyalsock, which held Strath Haven to just 12 points in the first half.

“I was really proud of our defense,” Insinger said. “We created havoc. The bottom line is when you look at the scoreboard, we are getting results.”

All Photos can be purchased by contacting Brett R. Crossley at Brettcrossley44@gmail.com or reaching him on Twitter @BrettCrossley44 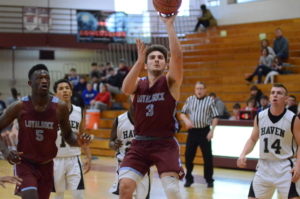 BRETT R. CROSSLEY/FOR THE WEBB WEEKLY
Loyalsock’s Anthony Pastore finishes at the hoop after a steal against Strath Haven. 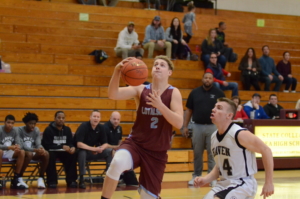 BRETT R. CROSSLEY/FOR THE WEBB WEEKLY
Aiden Gair completes a fast break for Loyalsock as he finishes with a layup in transition. 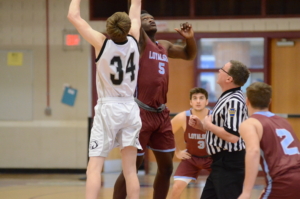 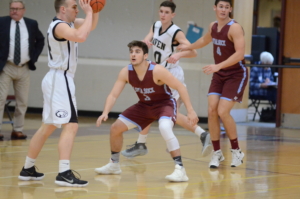 BRETT R. CROSSLEY/FOR THE WEBB WEEKLY
Loyalsock’s Anthony Pastore gets down to play defense during the opening game of the State College Kiwanis Holiday Basketball Classic. 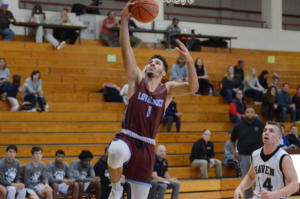 BRETT R. CROSSLEY/FOR THE WEBB WEEKLY
Loyalsock’s Gerald Ross goes in for a layup after one of two steals against Strath Haven during the State College Holiday Basketball Classis.