By BRETT R. CROSSLEY For the Webb Weekly  BERWICK—It was a bumpy start for Keystone as it found itself in a four-run deficit after just the second inning of its Major Baseball State Championship game against Lehigh.  Braylen Corter struggled as Lehigh’s offense opened hot, scoring two runs. He continued to struggle and was big 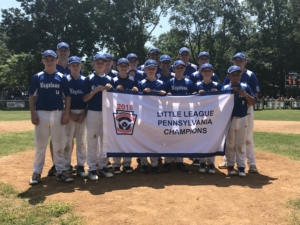 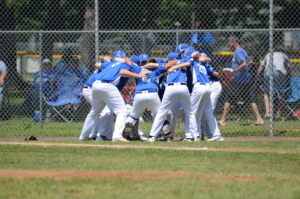 BRETT R. CROSSLEY/FOR THE WEBB WEEKLY
Keystone’s Major Baseball team breaks it down moments before taking on Lehigh in the State Championship. 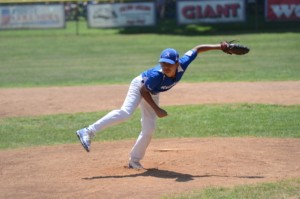 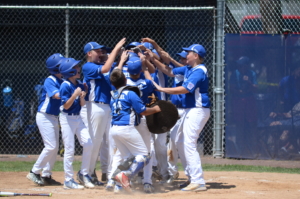 BRETT R. CROSSLEY/FOR THE WEBB WEEKLY
Keystone’s Gavin Burnell is mobbed by teammates after hitting a three-run home to pull his team within a run of tying. Keystone completed the comeback in the bottom of the sixth to claim the Major Baseball State Championship with a 6-5 win over Lehigh. 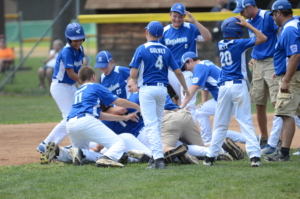 BRETT R. CROSSLEY/FOR THE WEBB WEEKLY
Keystone players and coached celebrate on the field moments after winner the Major Baseball State Championship with a 6-5 victory over Lehigh.

BERWICK—It was a bumpy start for Keystone as it found itself in a four-run deficit after just the second inning of its Major Baseball State Championship game against Lehigh.

Braylen Corter struggled as Lehigh’s offense opened hot, scoring two runs. He continued to struggle and was big enough to tell his coach he wanted to be pulled in order to help the team. It was a big move on Corter’s part as his trust in his team and coaches was on full display. It was rewarded as Keystone turned to Nate Wian, who held Lehigh scoreless through four more innings of play. Wian received three double plays from his defense and clutch hitting from pinch hitters as Keystone defeated Lehigh 6-5 with a walk off single in the bottom of the sixth inning to win the Major Baseball State Championship.

Keystone will advance to the Mid-Atlantic Regional tournament in Connecticut where it will take on the winner of either New York or Washington D.C. in the 10 a.m. game on August 6th.

“It feels awesome to be the third Keystone team to win the State Championship,” Keystone manager Patrick Johnson said. “There’s no feeling quite like it. We’re just going to go with the same mentality that we’ve had at every tournament. We’re going to expect a great opponent. We just have to find a way to win three more games and we’ll see everybody back in Williamsport.”

Keystone will have some lofty goals for the Mid-Atlantic Regional Tournament, but those will be set later. As for Sunday’s contest, Keystone found itself trailing by four runs at the conclusion of the second inning. Up to that point, Keystone had only given up two runs in three games of the State Tournament.

The tide of the game changed when Gavin Burnell stepped into the batter’s box during the four inning. Two runners were on base and Burnell knew his team needed him.

He went to the plate hoping for a high fastball and got one on the second pitch of the at bat. He quickly jumped on the offering and sent it over the fence for a three-run shot. The hit pulled Keystone within a run of tying and completely changed the momentum of the game with one swing.

“I was looking for a high pitch, because that’s usually the ones I hit home runs on,” Burnell said. “I wasn’t really nervous, because I knew we would come back in the end anyway. He almost hit me with one and then I hit the one he threw over the plate.”

The home run was of the no doubt variety as it sailed over the left field fence  and into the crowd of Keystone supporters. It was a typical Keystone moment as a player who didn’t even start the game made an impact once given the chance.

As Burnell ignited the offense, the defense overcame the shaky start to close out two innings with double plays and turn another to get runners off base in the third. Lehigh scored five over the first two innings. Over the stretch, Lehigh posted seven hits. It only connected with two the rest of the way as Wian and the Keystone defense stepped up.

The second ended with a double play started by the second baseman. In the third, after consecutive singles to open the frame, Keystone turned another double play that started at second. The fourth ended with Corter helping to turn Keystone’s third double play of the day.

“Nate Wian is the player of the game,” Johnson said. “He waited his for his turn and came in and bailed us out. It’s just another pitcher on the team who comes in and has somebody’s back.”

As Wian, with an assists from Levi Schlesinger in relief to record the final out, slowed down Lehigh’s offense, Burnell put his team in a position to win with his three-run shot in the fourth. Dallas Alexander tied the game in the fifth with a home run and Elek Fravel played hero with a walk-off single.

“Before I came up I was nervous,” Fravel said. “At the time when we were down we thought Gavin was going to hit it. We all knew that was gone and it gave us a chance.”

With Wian dealing and the offense coming to life Keystone’s fans, who showed up in throngs, started the signature “We are Keystone” chant. The momentum shifted once the fans got back into the game and the team on the field finished off the comeback.