By BRETT R. CROSSLEY For the Webb Weekly  HEPBURN LYCOMING—Keystone’s Cayden Culvey doesn’t not like to slide. If the situation calls for it he’s more than capable, but it’s not something he enjoys.  In the bottom of the first inning during Sunday’s District 12 Major Baseball Championship at Hepburn, he was called on to run 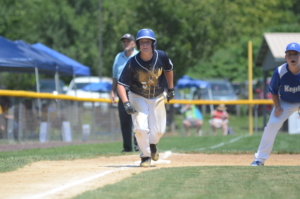 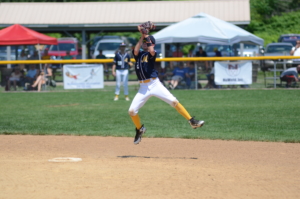 BRETT R. CROSSLEY/FOR THE WEBB WEEKLY
Montoursville’s Elias Eck jumps to grab a high throw at second during the first inning of the District 12 Major Baseball Winner’s Bracket Final against Keystone. The leaping grab saved an overthrow and caught a runner in a rundown. A Keystone run would score as Cayden Culvey slid under a tag to be safe at second. 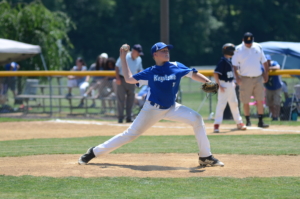 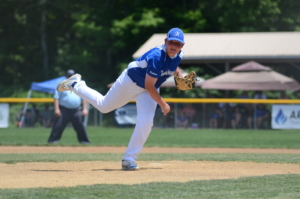 BRETT R. CROSSLEY/FOR THE WEBB WEEKLY
Keystone staring pitcher Levi Schlesinger delivers a pitch during the first inning of the District 12 Major Baseball Winner’s Bracket Championship at Hepburn Lycoming. Schlesinger was one of three Keystone pitchers in the game to help it defeat Montoursville 13-5. 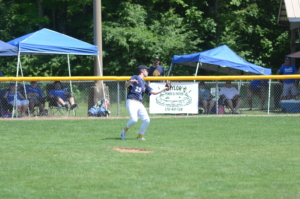 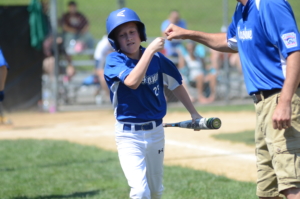 BRETT R. CROSSLEY/FOR THE WEBB WEEKLY
Keystone’s Kevin Grenninger give his coach a fist bump after scoring a run during the District 12 Major Baseball Winner’s Bracket Final against Montoursville. 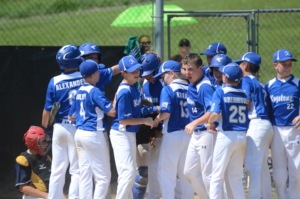 HEPBURN LYCOMING—Keystone’s Cayden Culvey doesn’t not like to slide. If the situation calls for it he’s more than capable, but it’s not something he enjoys.

In the bottom of the first inning during Sunday’s District 12 Major Baseball Championship at Hepburn, he was called on to run for Gavin Burrell after a single. With a runner on third, Culvey was called on for a double steal and was forced into a sliding situation as Montoursville went for the out at second. Culvey not only slid, he was able to force a pickle to score a run.

The tally matched Montoursville’s big start to tie the game. After that Keystone’s offense took over as it scored four in the third and six in the fourth en route to a 13-5 win at Hepburn Lycoming.

Keystone will advance into Friday’s District 12 Major Baseball Championship at Volunteer Stadium in South Williamsport to play either Loyalsock, Montoursville, or Williamsport. Montoursville will take on the winner of Loyalsock and Williamsport, which play tomorrow at Montoursville at 6 p.m. Keystone has defeated all three teams it could possibly be matched up against in the championship.

“Baseball is a strange game and all it takes is for one kid to be out there having a good game and anything can happen. We can’t take anything for granted,” Keystone manager Patrick Johnson said. “We don’t want to play Saturday, we want to play well and win it Friday. Any of the three teams that come back through we have a lot of respect for.”

The rest of the District 12 bracket will work itself out. If Keystone’s offense produces the way it did against Montoursville, all of the teams might be in trouble. Keystone connected with 16 hits, scored 10 runs between the third and fourth innings, and had nearly every player record a hit.

Montoursville scored three runs in the top of the first inning, but Keystone responded immediately with four hits and three runs it the bottom of the inning.

“We just kept swinging and kept playing,” Johnson said. “We told them we were going to eventually put it together and we did. The way Elek Fravel is hitting, and Braylen Corter and Levi Schlesinger, there’s just a bunch of them that made big plays.”

Fravel produced at an elite level for Keystone. He finished 4-for-4 with two doubles, two runs, and two RBI.

In the fist inning he connected with his first double to score run. He would later score in the inning to tie the game. He singled in the second and third before hitting his second double to score another run in the fourth inning.

“We weren’t really happy when they were scoring those three runs, but once we got those runs back it boosted all of our energy,” Fravel said. “Hitting the ball well was important. Once I hit it it gave all of our team the confidence to win the game.”

Keystone’s confidence was on full display throughout the hot day. In the third inning it posted four hits and four runs as Corter’s two-RBI single highlighted the inning. Gardener Fravel also had a big bunt single to advance a runner and put him in scoring position

In the fourth inning Keystone posted five hits to score six runs. Fravel hit his second double and Levi Schlesinger connected with a home run. Schlesinger started the game for Keystone and pitched in difficult conditions. Gabriel Johnson was called for relief in the second and kept Montoursville scoreless until a small outburst in the sixth inning.

“We were struggling a little bit,” Patrick Johnson said. “The mound is really flat and they were having trouble gripping the ball. Plus it was really, really hot out there. I was proud of Gabe. He came in and threw some really good pitches. He mixed speed and was able to get some ground balls to end the inning.”

Johnson walked the first two batter of the third inning, but ended it with two strikeouts and a ground out.

Montoursville scored three runs in the first inning when two walks and three singles helped it gain the lead.

“It started well,” Montoursville Manager Mark Mussina said. “We swung the bats well. We got off to a real good start. I was encouraged by our offense early, but their pitching settled in. We got some opportunities and just didn’t get the big hits”