By BRETT R. CROSSLEY For the Webb Weekly  WOOLRICH—Williamsport was down to its final three outs, trailing by one run, when Tarik Abdul-Hakim noticed one of his teammates feeling down on the bench.  Ethan Eckard was in the middle of a tough stretch and let his emotions show as the bottom of the sixth inning 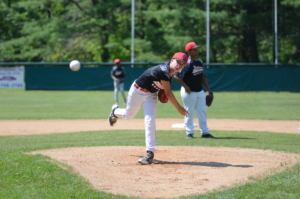 BRETT R. CROSSLEY/FOR THE WEBB WEEKLY
Newberry pitcher Noah Turner delivers a pitch during a game against Williamsport at Woolrich. Williamsport was able to score late to record a 4-3 win and advance in the District 12 Major Baseball Tournament. 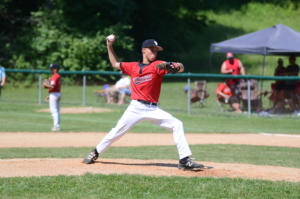 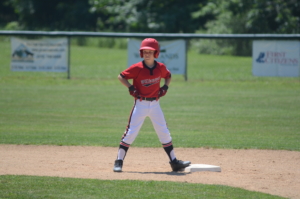 BRETT R. CROSSLEY/FOR THE WEBB WEEKLY
Williamsport’s Klyher Allis stands on second after connecting with a double during a District 12 Major Baseball game against Newberry. 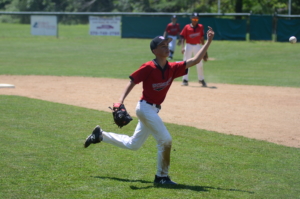 BRETT R. CROSSLEY/FOR THE WEBB WEEKLY
Williamsport’s Makai Day tosses a ball to first after making a stop from the pitcher’s mound. 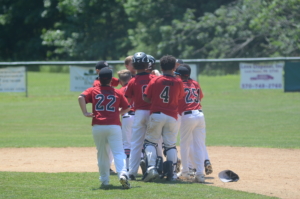 BRETT R. CROSSLEY/FOR THE WEBB WEEKLY
Williamsport’s Makai Day is mobbed by teammates after connecting with the game winning hit to knock off Newberry 4-3.

WOOLRICH—Williamsport was down to its final three outs, trailing by one run, when Tarik Abdul-Hakim noticed one of his teammates feeling down on the bench.

Ethan Eckard was in the middle of a tough stretch and let his emotions show as the bottom of the sixth inning started. Abdul-Hakim immediately went over to his teammate, put an arm around him, and encouraged him moments before one of the biggest at bats of the season.

The encouragement worked as Eckard broke out of his slump with a single to the centerfield wall to score a run and tie the game. The rest was up to Makai Day, who ended the game with a shot to left field to score a run and give Williamsport a 4-3 win over Newberry.

“They are kids, so naturally they were hanging their heads a little, but like I teach the kids this is a six inning ball game,” Williamsport manager Tariq Moore said. “They came through like true champions. I’m really proud of all of them. There were a lot of kids that contributed.”

Eckard had struck out in his previous at bat before playing hero in the bottom of the sixth. Abdul-Hakim’s pickup seemed to help him emotionally, but the RBI single sent him over the top.

“He was on the bench talking everybody up,” Moore said of Abdul-Hakim. “A lot of kids will tuck their tail when they aren’t staring, but he really showed me something today as far as contributing and keeping his team in the game. I see things like that and it’s bigger than any of the wins or loses, because these kids will grow up and the attitude carries over. When I saw that I felt like we had won.”

There still was a game to win and Eckard quickly put his team in position to do just that with his RBI single to score the tying run. The hit scored Quentin Mazzante, who reached on a lead-off single to the centerfield fence. Mazzante also drove a run home in the third to give Williamsport at two-run lead.

With the game tied and two runners on base Day came up and worked his way to a full count. He fouled a couple pitches off as the drama built and finished the comeback with a single into left field. Moments after the runner crossed the plate, Day was mobbed by teammates in the infield.

“I was just trying to get a base hit and put the ball in play, but it just worked out,” Day said. “It was really cool. It’s really special, because we get to move on and hopefully we can get to volunteer.”

Day was also called on to pitch and combined with Cole Shuler to keep Newberry’s lineup in check throughout most of the game. The two pitchers combined to post 10 strikeouts. That included three straight to end the top of the sixth inning and keep the game at a one-run difference.

Newberry made its move in the fourth when a hit batter and double from Noah Waugh, who subbed in off the bench, opened the door for a big inning. An error put another on and scored Newberry’s first run of the game. Jamaire Harden drove two more runs in and gave his team a 3-2 lead.

“They kept their heads up and kept coming after it,” Newberry manger Troy Rundio said. “That’s all I can ask for out of all the kids.”

Newberry never gave up. One player that proved it was Caleb Neidig, who connected with a double in the opening inning. He was also called on to pitch and gave up just two runs in three innings of work.

The game was a little more special for Neidig, who came up in Williamsport Little League and knew most of the players he was going against.

Next: Williamsport vs. Loyalsock at Montoursville, Monday, 6 p.m.