By BRETT R. CROSSLEY For the Webb Weekly MONTOURSVILLE—For the first time in a long time Loyalsock’s Gerald Ross sat on the bench at the start of a basketball game. Ross could have sat there inattentive and indifferent to the game unfolding in front of him, but he didn’t. He was engaged, helpful on timeouts, 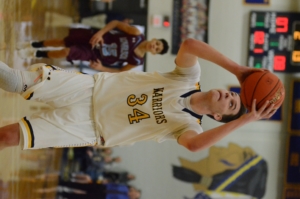 BRETT R. CROSSLEY/FOR THE WEBB WEEKLY
Montoursville’s Austin Loe goes up for a put back after grabbing a rebound during a game against Loyalsock. 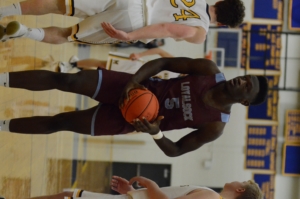 BRETT R. CROSSLEY/FOR THE WEBB WEEKLY
Loyalsock’s Bam Brima collects a ball underneath the basket during a game at Loyalsock. 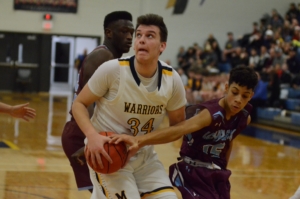 BRETT R. CROSSLEY/FOR THE WEBB WEEKLY
Montoursville’s Austin Loe does up for a shot as Loyalsock’s Idris Ali attempts to steal the ball. Loe was outstanding for the Warriors, scoring 20 points in the 64-48 loss to Loyalsock. 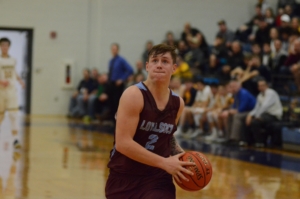 BRETT R. CROSSLEY/FOR THE WEBB WEEKLY
Loyalsock Aiden Gair goes into for a layup during a fast break at Montoursville. Gair hit three treys in the game and finished with 15 points as the Lancers defeated Montoursville 64-48. 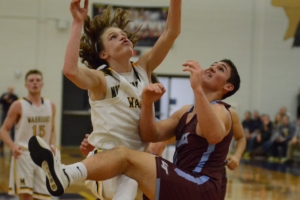 BRETT R. CROSSLEY/FOR THE WEBB WEEKLY
Loyalsock’s Connor Watkins and Montoursville’s Dillion Young both jump up for a rebound during the third quarter of a game at Montoursville. 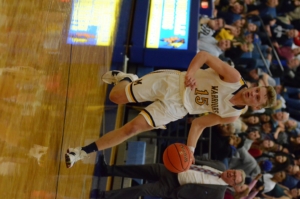 BRETT R. CROSSLEY/FOR THE WEBB WEEKLY
Montoursville’s Dylan Bower dribbles the ball pass the middle of the court after the Warriors were able to fight their way through Loyalsock’s press. 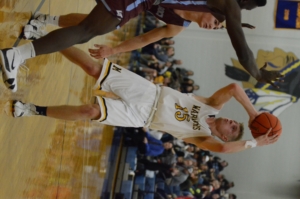 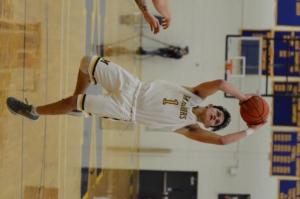 BRETT R. CROSSLEY/FOR THE WEBB WEEKLY
Montoursville’s Eddie Rodriguez goes through the lane for a bucket during the second quarter of a game against Loyalsock. 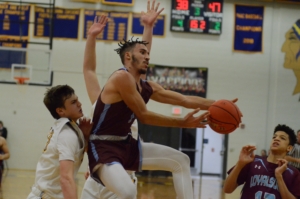 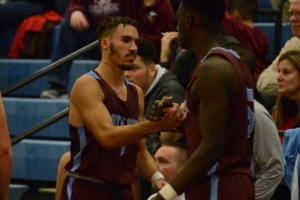 BRETT R. CROSSLEY/FOR THE WEBB WEEKLY
Loyalsock’s Gerald Ross and Bam Brima shake hands as Ross comes to the bench during the fourth quarter of a game against Montoursville. 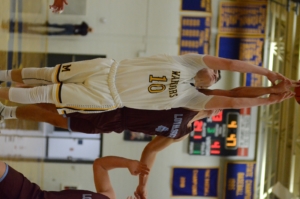 BRETT R. CROSSLEY/FOR THE WEBB WEEKLY
Montoursville’s Josh Burger and Loyalsock’s Connor Watkins both go up for a rebound. 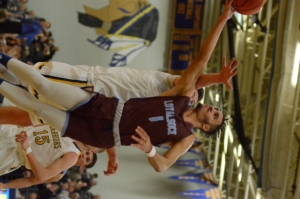 MONTOURSVILLE—For the first time in a long time Loyalsock’s Gerald Ross sat on the bench at the start of a basketball game.

Ross could have sat there inattentive and indifferent to the game unfolding in front of him, but he didn’t. He was engaged, helpful on timeouts, and interested in every moment of the eight-minute first quarter.

He was called on in the second and immediately made his impact felt as he scored nine points to lead the Lancers to a halftime lead. Ross continued to pour the shots in and finished with 22 points in three quarters of work as the Lancers defeated Montoursville 64-48 to claim the first game in the “Battle of the Bridge” series. The two teams will play at Loyalsock on the 30th of January to closeout the heated local rivalry.

“I wasn’t nervous, I knew my guys were going to do what they do,” Ross said. “I was cheering them on the from the bench and trying to give them some energy. When I was called on to come into the game, I was ready to do my job.”

Ross missed his first attempt from the floor, but the next two shots were true as he scored nine of his team high 22 points over the eight-minute stretch. He also added a steal as the Lancers carried a 39-26 lead into the halftime break.

Ross led the way with nine points, but he wasn’t the only Lancer to contribute to the 18-point quarter. Anthony Pastore, who scored 21 points and added four rebounds, chipped in with seven points. Connor Watkins added a bucket and Bam Brima recorded two steals and grabbed two rebounds.

“They wanted this ‘W’ badly,” Ron “CI” Insinger said. “Gerald broke a team rule and had to sit a quarter, but the bottom line was we just didn’t get out of the blocks like we would have if Gerald had been on the floor. We aren’t making excuses. It’s a life lesson. He came off the bench and was huge for us.”

Ross wasn’t done with his scoring burst in the second quarter. He continued to chip away at Montoursville’s confidence, converting all four free throws from the line and making another shot from the floor in the third quarter.

Watkins was again a big help inside, especially after Brima was called for a technical and forced to sit most of the second half. Watkins stepped up in his absence, grabbing eight rebounds and adding six points to give Loyalsock a threat underneath the basket.

“We’re very close and spend a lot of time together,” Watkins said of picking his teammate up. “Six of the seven days we are playing ball together and it’s not just basketball. We play multiple sports and we hangout outside of school. We spend a lot time together.”

The closeness of the team was on full display at the end when Brima was there to greet each and every player with a handshake and hug as they came off the court. It was a telling moment of the type of teammate Brima has been to the team.

“He’s a natural leader,” Insinger said. “He’s well respected and a roll model on this team. Everyone tries to emulate him.”

Loyalsock pulled away in the fourth quarter when Ross hit a three, blocked a shot, and stole a pass to setup an easy transition basket. He was all over the floor for Loyalsock as was Patrose, who scored 13 points in the first half. He also showed little to no fear diving into the middle of the paint to grab five rebounds.

For Montoursville, it was a game of ups and downs that just seemed to get away from it at the end.

“Luckily for us they weren’t making shots and turning the ball over early,” Montoursville coach Mike Mussina said. “There’s a lot of emotion in the game. It’s our best crowd of the season so far. The television people are here and there’s a lot of emotion going on. You have to get through that and take a couple deep breaths.”

One Montoursville player not bothered by the crowd was Austin Loe, who forced Brima into foul trouble and was outstanding in the paint against Watkins.

Loe finished with four blocks, 20 points, and seven rebounds for the Warriors. He also surprised the Loyalsock defense in the third when he pulled back for a long three.

“He’s one of our few guys who have varsity experience coming into this year,” Mussina said. “He’s a big kid and we’re expecting things from him. He played pretty well. He rebounded well today and caused issues with people because of his length.”

Montoursville let students who brought a teddy bear to the game in for free. Each teddy bear was launched to the floor at halftime and collected by the cheerleaders, who later donated them to needy families.

All photos can be purchased by contacting Brett Crossley at brettcrossley44@gmail.com or reaching out to him on Twitter @BrettCrossley44